I’m pleased to introduce David Carmichael, one of the project’s new Collection Assistants. Here, Dave takes a look at the project through fresh eyes, and reminds us all why we’re undertaking Collections in the Landscape…

It was with feelings of trepidation and excitement that I entered the green doors of Buxton Museum and Art Gallery to begin my first day of work as Collection Assistant. Trepidation, because I was aware of the mammoth task (forgive the pun!) which lay ahead of us in transforming the museum upper gallery into a permanent exhibition fit for a 21st century audience and, perhaps, beyond. Excitement, because the Buxton Museum Collection is a vast melting pot of archaeology, culture, art, history, geology, biology, the ‘just plain weird’ and plenty of, as yet, undiscovered facts and revelations, with which I was keen to get to grips.

There is something for everyone in this amazing collection: from prehistoric mammoth jawbones and Peak District hill-tribe weapons of war, to the living biology of the landscape, cocooned in the brachiopods, that inhabited the sea which covered the Peak District millions upon millions of years ago. Or, if archaeology and history are not your thing, the beautifully rendered artworks of local painters and sculptors, capturing the monumental and immeasurable rawness of the Derbyshire and Peak District landscape are on regular display. 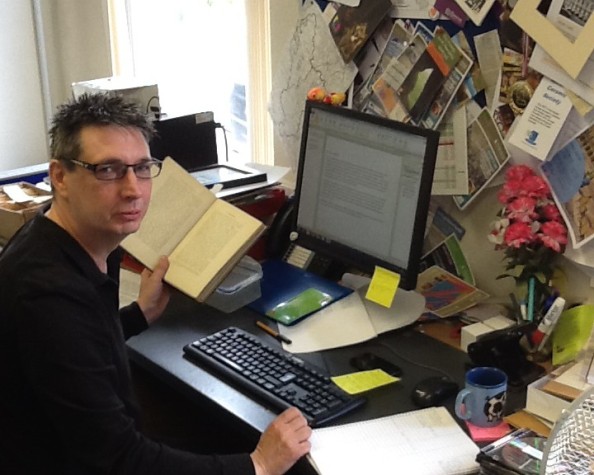 Collections in the Landscape is the overall name of the project we are undertaking and my first task is to research and identify objects of interest relating to the ancient Iron Age and Roman Fort of Melandra; situated just above Glossop. These objects of interest will, in turn, be used to plan a walking trail to, and around, Melandra, that can be accessed as a mobile phone app or online.  And, so it was that as I opened my first acid-free archive box and carefully delved into its contents; hundreds of uncategorised pieces of Roman Grey-ware pottery sherds, that trepidation turned to exhilaration as I realised that we were on a journey. A journey through history and time that will be realised, but not end, in 2017.  Who could fail to be inspired?

Halloween is very nearly upon us… so for this week I thought it would be suitable to revisit the mystery of the Mouselow Stones.

According to records, the Mouselow stones were first found at the site of Mouselow Castle (Castle Hill) in Glossop around 1840 by Reverend George Marsden when the area was being excavated to build a chapel. Reverend Marsden then took the stones and incorporated them into his house in Hadfield. After a few years the Duke of Norfolk requested to take custody of the stones, where they stayed until they were transferred to the Glossop Antiquarian Society. With the outbreak of war in 1939 the society disbanded and the stones lay unknown in a basement for decades. They are now on display in the Wonders of the Peak at Buxton Museum and Art Gallery.

Very little is known about the area of Mouselow castle, and even less about the stones themselves. Mouselow castle is believed to be the site of an Iron Age hillfort which was subsequently used as a medieval motte and bailey castle. Some believe there could alternatively have been a medieval hunting lodge here instead, as this part of the peak district was densely forested 1000 years ago. Apparently in the 18th century there were indications of a building on the summit, including remains of a spiral staircase. However, as a lot of the area has been disturbed by quarrying, it is hard to know for certain and we are reliant on old descriptions of the site and often anecdotal evidence. The site has been excavated twice: in 1965 by Mr Scott and pupils from Glossop Grammar School and 1985 by Glynis Greenman. 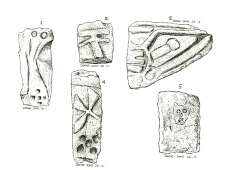 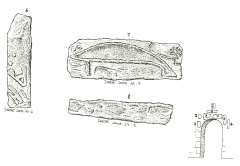 The mystery of the stones is much more peculiar and recent, and has led to a belief in the area that the stones are cursed. When Glynis Greenman undertook the excavation of the site in 1985 she experienced a lot of warnings about working on the site, she describes these in a letter to Mr Mike Bishop (our curator at the time) as:

“…ranging from the evil of stone heads and horned figures to the possibility of ending up nailed to a tree. I do realise this sounds like a bad script for second-rate B movie from the Hammer House of Horror; but fortunately most of this has happened while there were other people present so at least I can prove it really did happen.”

Dr. David Clarke has written further on Greenman’s strange experiences during the dig. But the weird events did not stop there… Apparently, when the stones were in storage before coming to the museum they were housed with computers and other electrical items. These wouldn’t work whilst stored with the stones, and couldn’t be fixed by anyone, and only once the stones had left did these things return to working order. This odd chain of events seems to have stopped when the stones came to the museum… 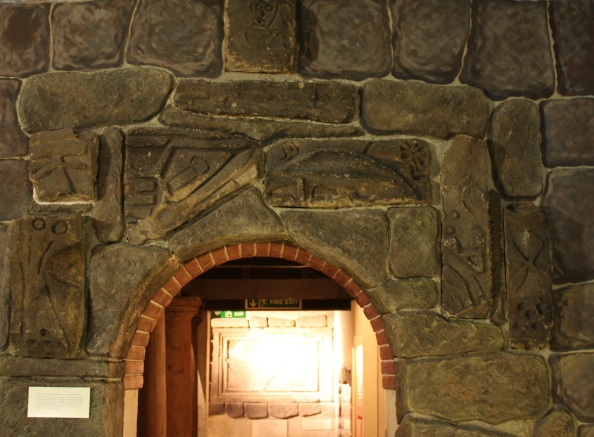 The Mouselow Stones in the Wonders of the Peak Gallery

But what actually are the Mouselow Stones? No one seems to be able to agree. The current label in the museum says that they are of ‘Celtic (Iron Age) origin’ but Greenman herself says ‘it cannot be verified that they are of Celtic date… the stones could derive from any period within the last two thousand years’. This certainly agrees with the most recent work we have had done on the stones which states that ‘they are more likely to be medieval or post medieval’. We should certainly not assume that because they are of poor quality that they must be old; Anglo-Saxon and Celtic artisans were incredibly skilful, as their archaeological, artistic and literary legacies demonstrate. The crude pattern work in the stones instead suggests a person learning to carve in stone rather than a skilled carver. The other issue with the stones is that they do not show any signs of weathering, which you would expect if they had been outside, and some of the stones even have evidence of machine working. 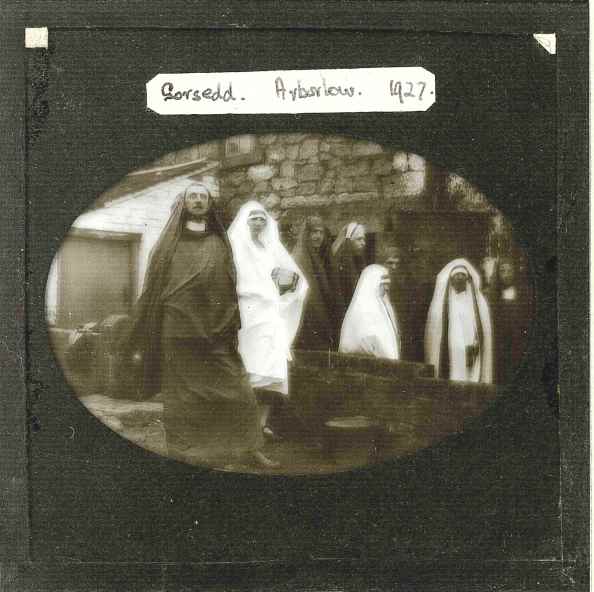 A Group Dressed as Druids, Arbor Low 1927 – a museum favourite.

But why, if they aren’t Celtic, would anyone think that they were? In the mid-18th century druidism was fast becoming a popular topic and many visitors and collectors started to come to Derbyshire to find Celtic and druidical remains. For instance Major Hayman Rooke, one of the main figures in popularising druidism, described the Nine Ladies stone circle, on Stanton Moor, as a druidical temple. It is during this period that the remains at Mouselow Castle were first described. By the time Reverend Marsden was excavating the site in 1840 for his chapel druidism was an established idea and was morphing into a more general antiquary curiosity. Greenman says ‘it is impossible to date stone out of context’ but that ‘it is inconceivable that the stones had lain unnoticed on the hill until their discovery by the vicar [Marsden]’. Could it be that the stones, with their carvings ‘in the Celtic tradition’, were in fact introduced to what was a known iron-age site during this period of druidical interest? We would love to find out.

For now the stones keep hold of their secrets – perhaps we will never know their real story.