One of the challenges we face with a project like Collections in the Landscape is to provide the public with high-quality images of the objects from Buxton Museum’s collection. Although I have grown accustomed to taking the occasional snap over the years, photographing hundreds of artefacts for people to view online is a daunting task. Luckily, we have hired the services of professional photographer Nick Lockett to get the ball rolling. The plan is for Nick to shoot key objects for the early stages of the project and for the team to absorb some of his expertise and continue his legacy. However, as you will be able to see over the next few months, Nick’s pictures are fantastic. If I can take shots half as well, I’ll be happy.

On Monday 5th, August, Nick came in to photograph a selection of objects from BMAG’s Wonders of the Peak gallery. The safety and security of the artefacts was paramount so we took time to remove and replace the objects. The Wonders of the Peak was built in the 1980s and the display cases have rarely been opened since. Myself and my Collections in the Landscape colleagues, Anna and Joe, were faced with a series of puzzles as we tried to find our way into the displays. For a moment, it was reminiscent of 90s game show The Crystal Maze. Amongst the selection were two Bronze Age skulls and we enlisted the handling skills of assistant manager and resident archaeologist Martha Lawrence to ferry them to the photographer’s temporary studio in gallery one.

The art gallery soon became animated with clicks and flashes from Nick’s busy camera. Nick and his brother, Steve, were great about letting me shadow them. I worried about getting in the way and asking too many annoying questions but the Lockett brothers were very accommodating. In between shots, Nick gave me some of his trade secrets on lighting and composition. He told me that the most important aspect of photographing museum objects is to make it clear to the viewer what exactly they are looking at. Photographing the top of a skull might look great, for instance, but will people be able to tell that it’s a skull?

For the time being, I am content with seeing what Nick can do with the museum’s collection. As far my own photographs are concerned, I think that setting up a similar studio environment would be beneficial, it’s all in the preparation. Although our equipment is not as good as Nick’s, getting the best out of what we have got is the key. BMAG has a large archive of photographs, most of which can be seen on website Picture the Past . Recently, I found this lantern slide linked to one of the pilot locations for Collections in the Landscape, Arbor Low. It is entitled “A group dressed as Druids” and dates from 1927; a curious scene as I’m sure you will agree. 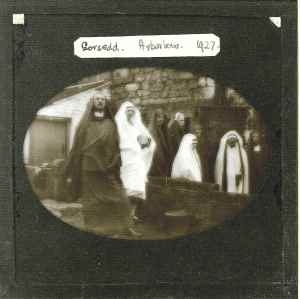 Getting an image from a piece of glass is not easy. In the end, I had to scan the negative but left the scanner’s lid up so the light would shine through it. If you ever try the same technique, take care to shield your eyes from the glare! Another challenge we face in coming weeks is to shoot a selection of paintings from the museum’s art collection and many of these are glazed. Again, I will be seeking tips from Nick. Watch this space to see how we get on. 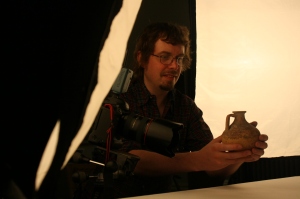