It’s good to get out into the landscape and get a sense of where exactly Buxton Museum’s artefacts have come from. Some of the staff braved the winter weather last Friday to visit local Stone Age monument The Bull Ring, where flint tools have been discovered. The plucky adventurers were accompanied by experimental archaeologist and expert flintknapper James Dilley.

Dove Holes is a village just over three miles away from Buxton. Despite being a quiet and unassuming place that most people just drive through to get to somewhere else, it has a rich heritage. Apart from the henge known as The Bull Ring, the local quarry has yielded remains of some remarkable prehistoric animals such as the mastodon and the scimitar-toothed cat. The remnants of these dentally-challenged creatures are an insight into how different the Peak District must have been thousands of years ago although the snow, wind and sub-zero temperatures made it easier to imagine an ice age!

The Bull Ring is clearly sign-posted about halfway along the main road but its location seems at odds with the patchwork arrangement of the village. The circular earthwork has had a fight for survival over the centuries. Apparently, the stones from the henge were removed and used on the Peak Forest Tramway in the late 1700s. Developments in the 19th century caused further damage and until recently, the annual village bonfire was held here. In terms of history, The Bull Ring is as vital as the other famous local stone circle, Arbor Low, but it has not been quite so lucky. Arbor Low still sits majestic and mysterious, largely undisturbed and surrounded by the rugged landscape of the Peak District. Fortunately, both monuments are protected these days and are free for visitors to speculate on their exact purpose and meaning. It is interesting to note that both henges are accompanied by burial mounds. The barrows lend weight to the sense of ancient significance. 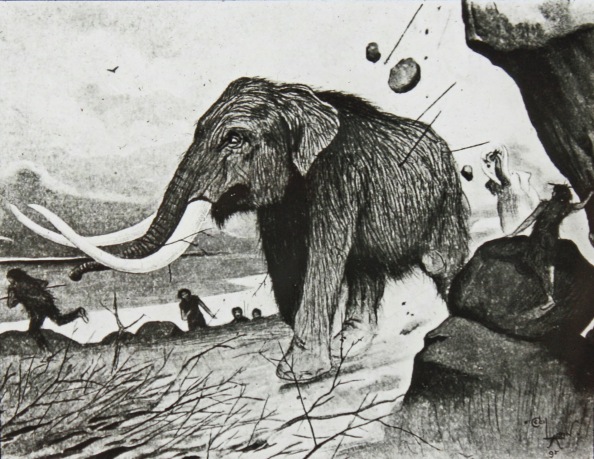 You can visit The Bull Ring for yourself. The closest part of Buxton is Fairfield where I have already explored a wealth of history, including the barrow known as Fairfield Low or Skeleton Wood or even Skelebob Wood so you could include this on the same tour but the land is private so seek permission from the adjacent farm first.

Buxton Museum and Art Gallery reopens on May 1st 2017 and the brand new Wonders of the Peak gallery will feature artefacts found in Dove Holes. Like us, you may come to think of the village as the home of The Bull Ring and the scimitar-toothed cat.

Buxton is a town where every road or street is paved with history. On the northern edge of Buxton, the district of Fairfield has its own vibrant past. Until 1894, it was a separate town; some die-hard natives maintain that it still is. Admittedly, Fairfield does seem to retain its own unique character. Using some fascinating items from the collections of Buxton Museum, I hope you will join me on a stroll.

Walking underneath the viaduct at the end of Spring Gardens, following the A6 in a northerly direction, we ascend the gentle rise into the borough of Fairfield. As this painting by Tony Beresford testifies, the hill offers an impressive view of the town centre.

Even as far back as 1839, artists were inspired by the view. This watercolour by E. Drennan depicts Buxton as a much smaller town. It makes it easier to believe that Buxton and Fairfield were once two different places, separated by a tract of green land.

View of Buxton from Fairfield 1839 by E. Drennan watercolour

Fairfield Road out of Buxton is usually busy with traffic. This photograph from the 1920s is a glimpse of an era with fewer automobiles. Did Fairfield have its own procession or is this part of the Buxton carnival that takes place each July?

At the top of the road, the rather resplendent sight of St. Peter’s Church is waiting to greet you. Dating back to 1839, the church is built on the site of a much older version. This photograph from the Board collection was taken in 1932 but the view is much the same. The churchyard is the final resting place of Dr J.W. Jackson (1880-1978) whose work and collections were fundamental to establishing a museum in Buxton.

Across from the church is a green spot called Fairfield Common. Nowadays, there is a golf course but can you believe that it was once a race course? In June in the 1800s, this would have been the centre of life in Fairfield; drawing a crowd that had no radios, televisions, computers, phones or any of the modern luxuries of life that we take for granted today. Infact, this oil painting by H. Kingsley, dated 1825, portrays a Fairfield that is barely recognisable. 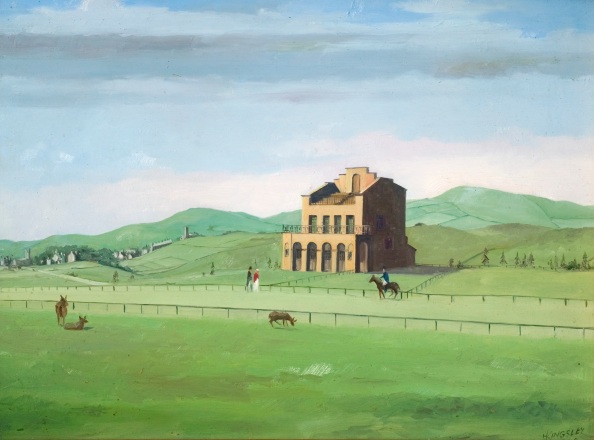 J.D. Meddins, son-in-law of famous local photographer J.R. Board must have gone to some length to get this shot of Italian and German prisoners of war clearing the snow from Fairfield Common in 1947. Buxton is famous for its challenging micro-climate and anyone who has lived in the town will probably have their own photos to prove it, Meddins being no exception.

Meandering away from the main drag, we venture into a vast labyrinth-like housing estate with a tiny commercial centre which residents call the top shops. Meddins again captures a wonderful shot of the shops in 1958, not long after they were built when they must have seemed very bold and modern.

One of the most intriguing features of Fairfield is also one of its most unknown. You could be forgiven for missing the Bronze Age burial mound of Fairfield Low; despite occupying the highest point in the district it is encircled by a crown of trees on private farm land. Some locals are aware of its existence but know it as Skeleton Wood or Skellybob Wood (skellybob is a great local word!).

Local antiquarian Micah Salt excavated Fairfield Low in 1895 and discovered human remains, noting that the sight had been previously disturbed, probably by lime burners. This skull now sits on the desk in Buxton Museum’s Boyd Dawkins study. It belonged to a man who died in middle age. Is Micah Salt’s discovery the culprit for the location’s eerie nickname?

There is a great deal more history to be found in Fairfield. Local writer David Owen has written several excellent books about the area that offer an opportunity to delve deeper. The basement of Scrivener’s bookshop on Buxton’s High Street has its own Micah Salt Museum if you want to know more about this interesting local character. Why not combine it with a visit to Buxton Museum and make it a day out?

Please note that the images used in the post are protected by copyright laws and if you wish to use any of them, please drop us a line at buxton.museum@derbyshire.gov.uk