A fortnight ago the Collections in the Landscape team visited the Museum of Science and Industry (MOSI) and Manchester Museum. We wanted to see how these museums use interactive and digital technology within their galleries. I expect we’ll be blogging quite a bit about our visit but I thought I’d kick it off by introducing two familiar faces.

Sir William Boyd Dawkins and J. Wilfrid Jackson both take a starring role in Manchester Museum’s Ancient Worlds gallery. The gallery and accompanying app focus on archaeology, inlcuding local artefacts as well as those from Egypt and further afield. It also highlights the archaeologists and collectors who found and donated these objects. 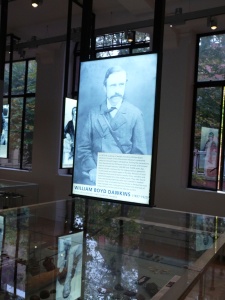 Dawkins and Jackson were both curators at Manchester Museum and the Museum holds thousands of their artefacts including the majority of the bone material that Dawkins collected from Creswell Crags in the 1880s. These two cave hunters are of particular interest to us at Buxton Museum, as we hold their personal archives, along with some of their collections. In fact William Boyd Dawkins opened Buxton Museum and Art Gallery in 1928 and our Boyd Dawkins Study Room remains one of our most popular galleries.

The Ancient Worlds app at Manchester Museum gives further layers of interpretation to the exhibition. Many of the labels included a four digit code which you input into the app, unlocking further information e.g an interactive 3D image of the objects or an audio accompaniment. We thought some of these worked better than others, but overall it was interesting to see how apps can be used in-gallery to supplement more traditional approaches.

A big thanks goes to Brian who took these photos for us after my camera battery died.  Brian has been working for the last four years on  Jackson’s archive at Buxton Museum.  You can find out more about Jackson and his correspondence on our website.